Thor is the Norse god associated with thunder and lightning. He is the most famous Norse deity. In fact, one of his claims to fame is that the weekday Thursday (Thor’s day) is named after him.

In Norse mythology, Thor is an Aesir god who personifies strength and fertility. Generally depicted with red hair and a red beard, he was prominent throughout the history of the Germanic tribes.

Thor’s prominence increased at the expense of Odin during the 9th century in Iceland. This was due to farmers fleeing from Norway to Iceland to escape the oppressive rule of the Norwegian king who worshipped Odin. His popularity reached a peak during the Viking Age (from around the 790s to 1066). 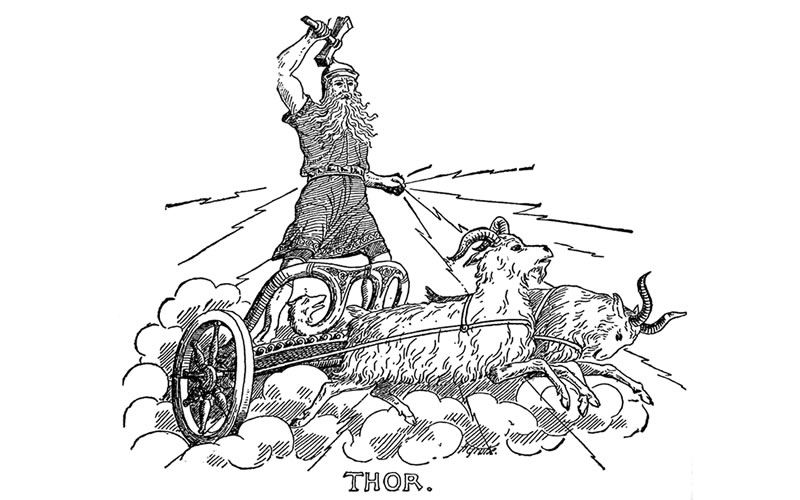 Thor’s father is Odin, the half-giant and ruler of the Aesir gods, and his mother is Jord (known as Fjörgen in old Norse), the earth goddess who is entirely of giant ancestry. Thor was married to Sif, a golden-haired goddess with whom he fathered a daughter, Thrúd. He had one son, Magni, with his lover, the giant Járnsaxa, and another called Modi. His children were all associated with strength and braveness, embodying their father’s features.

Thor carried a hammer called Mjölnir (lightning), which was built by the dwarfs and could crush mountains. He also possessed iron gloves and a magical belt named Megingjörd with which he killed his enemies. These “weapons” traveled with him in a cart or chariot drawn by two massive goats.

The giant goats who drew Thor’s chariot were called Tanngniost and Tanngrisnir. They could regenerate overnight after being killed and eaten by Thor, so long as their bones remained undamaged.

Besides being associated with thunder and lightning, Thor was also considered to be a god of fertility and hallowing.

Thor’s greatest enemies were the giants from Jotunheim, one of the Nine Worlds, as well as the massive serpent Jörmungand, the symbol of evil. The Eddas, a body of ancient Icelandic literature which form the basis for what we know of Norse mythology, depicts two battles between Thor and Jörmungand.  In one, Thor almost pulls the serpent from the ocean he lives in, but was stopped by the giant Hymir, who was afraid it would bring about the end of the world. Myth has it that the two enemies will indeed kill each other when this time, called Ragnarök, arrives.

While a foe to the giants, Thor was seen to be kind to mankind. The earliest Icelandic settlers called on him to sanctify their land with his hammer. He was also responsible for the blessing of weddings.